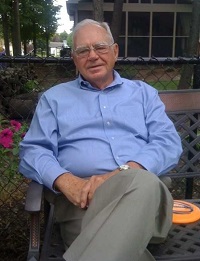 James R. Pittman passed away Wednesday, May 25, 2022, in Indianapolis Indiana. James was the son of James Roy Pittman and Anna (Allison) Pittman. He was born December 14, 1937  in Pence, Indiana.

James graduated from Indiana State University with his master’s degree and met and married his first wife, Ella (Bury) Pittman. After graduating they moved to Sullivan, Indiana where he started his coaching and teaching career. He then moved onto teaching, coaching, guidance counselor, and principal at North Posey High School. It was there that he won the first and only sectional championship while leading the team as Head Varsity Basketball Coach. After being at North Posey he moved to Vincennes where he retired as principal at Lincoln High School. He served over 40+ years in the education field. Upon retirement, he was honored as a recipient of the prestigious Sagamore Award. He was also on the board of directors for the IHSAA.

James was also a sports enthusiast. He especially enjoyed watching Purdue games and the Chicago Cubs. He cherished times with his family and friends as well.

Visitation for James will be Wednesday, June 1, 2022, from 11:00 am- 1:00 pm at Goodwin -Sievers Funeral Home, 524 Broadway Street, Vincennes, Indiana 47591. Services will start at 1:00 pm at the funeral home with Pastor Trevor Murry officiating. Burial will be immediately following at Maple Hill Cemetery in Princeton, Indiana. Donations may be made to Lincoln High School in remembrance of Mr. Pittman. Goodwin-Sievers Funeral Home is honored to be entrusted with the care of James.