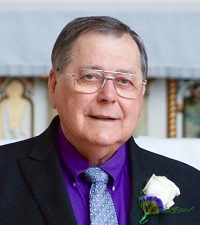 A 1952 graduate of Central Catholic High School, Ken attended Indiana University. His freshman year he was a member of the IU Men’s Basketball Team coached by Branch McCracken.  He was also a member of Sigma Alpha Epsilon fraternity.

He then joined the United States Army and was stationed at Fort Knox, Kentucky. Following an honorable discharge, he returned home and was a letter carrier for the United States Postal Service.  After his retirement, he became a real estate broker working with Ken Snider Realty and F.C. Tucker Emge.

Ken was a member of St. John the Baptist Catholic Church.   He was active in the Vincennes Jaycees and served as president. He was a lifetime member of Elks Lodge #0291 and a 65-year member of the National Association of Letter Carriers.

His greatest joys were spending time with family and following the many activities of his children and grandchildren. Whether he was at a basketball game, soccer match, dance recital, choir and band concert, or musical, he always had his camera in hand to preserve those special memories.

When his daughters joined the Clark Middle School/Lincoln High School band program, Ken served for 10 consecutive years as a board member including a term as president of the band boosters. Through this work, he assisted Oscar L Dunn, son of the first band director of Lincoln High School, to establish the Oscar L. Dunn, Sr. Memorial Scholarship. For over 30 years Ken served on the scholarship committee and presented these awards, on behalf of the Dunn family, to senior members of the LHS band who would be attending Vincennes University. Ken continued to be a loyal follower of the Pride of the Green Marching Band as all three of his grandchildren participated throughout their high school careers.

Ken cherished the many memories he and his wife shared at IU and remained a loyal fan of the Hoosiers.

Visitation will be held on Monday, May 23, 2022, from 5:00-8:00 PM EST at Goodwin-Sievers Funeral Home, 524 Broadway St. in Vincennes. A Mass of Christian Burial will begin at 11:00 AM on Tuesday, May 24, 2022 at St. John the Baptist Catholic Church, 803 Main Street in Vincennes, Indiana, with Rev. Tony Ernst officiating. Burial will follow at Memorial Park Cemetery.

In lieu of flowers, donations may be made to the James Kenneth Bowman Memorial Scholarship through the Vincennes University Foundation or online at vinu.edu/give.