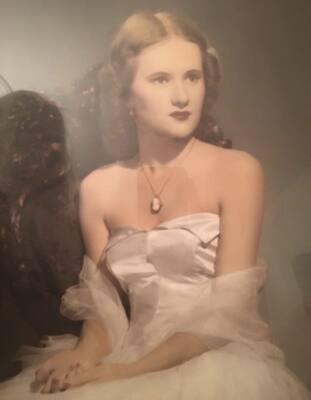 Gwendolyn Kirby Young of Edmonton, Kentucky passed away peacefully on Friday, February 7th 2020. The daughter of Arthur Kirby and Ruby Gosnell, she was born on January 12th 1931 and recently celebrated her 89th birthday surrounded by family and dear friends. Gwen was raised in Glasgow and attended Glasgow High School and later, a graduate of Western Kentucky University, and was a member of Glasgow Baptist Church. Her father, Arthur, was a well-respected Baptist minister in the community and her Grandfather established Kirby Grove Church in Austin, Ky. Gwen met her late husband, James Howard Young at a revival at Dripping Springs Baptist Church in Wisdom, Kentucky. Gwendolyn and James Howard were married for 62 years.
Gwendolyn Young was a Quality Control Analyst for the Kentucky State Department of Human Resources for over three decades. She was always recognized as a hard worker and was diligent in her pursuit of perfection in her career. But for all who knew Gwen, her true pride came from the success of her children. Nothing made her happier than cooking for her family, friends, record executives and numerous talented musicians, who came to the family farm to meet with the Kentucky Headhunters and Black Stone Cherry. She was known as a true southern cook and her recipes are treasured by many. She also took pride in the charitable events her daughter planned in Washington D.C.
Gwendolyn and her late husband, James Howard, lived on the Young family farm in the Randolph and Wisdom community. Both enjoyed raising and showing American Saddle Horses. Gwendolyn was an avid rider, showing side saddle throughout the state on her beautiful mare Sparking Katie. Gwendolyn was a devoted wife and mother. She is survived by three children, Richard Young(Cindy) of Edmonton, Ky, Mary Jane Thistlethwaite (the late Dr. William Thistlethwaite) of Glasgow, Ky, and Fred Young (Marla) of Edmonton, Ky. Five grandchildren, John Fred Young (Ashley) of Edmonton, Kentucky, Taylor Thistlethwaite (Rebecca) of Alexandria, Virginia, Clay Thistlethwaite of Glasgow, Kentucky, Rachael Young of Edmonton, Kentucky, and Audrey Young of Edmonton, Kentucky. In addition, two Great Granddaughters, Scout Young and Sage Young, She is survived by her sister Loucinda Kenney (Nobert Lee) one nephew, Anthony Kenney (Nancy) and one Great Niece, Lauren Kenney and numerous cousins.
The services will be held at Butler Funeral Home in Edmonton, Kentucky. Visitation on Sunday, February 16th from 3:00-8:00 pm. Monday, the 17th, visitation at 8:30 am and the funeral will be held at 1:30 pm. A private burial will be held at the Young Family Cemetery on the family farm.