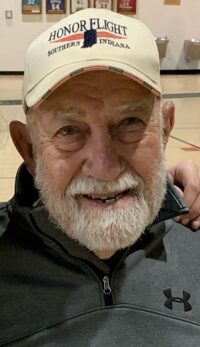 George was a member of Community United Methodist Church and worked as a meter reader for PSI/Duke Energy. He was a member of the Vincennes and Oaktown Gun Club’s, the American Legion and enjoyed shooting trap and skeet, hunting, fishing, and playing cards. George also enjoyed going on golf cart rides, and family get together’s. He had a really good connection and bond with fitting in with the younger generation and the younger generation thought a lot of George.

Friends may visit with George’s family from 4:00 pm until the hour of service time of 7:00 pm on Tuesday, February 15, 2022, at Goodwin-Sievers Funeral Home, 524 Broadway, Vincennes, IN. George’s funeral service will begin at 7:00 pm and Tony Burkhart will officiate. George will be laid to rest next to his wife Evelyn in Memorial Park Cemetery at a date to be determined. Online memories may be shared with George’s family and friends at www.goodwinsievers.com. The Newman family has requested memorial contributions be made in George’s name to Good Samaritan Hospice, 601 S. 9th St., Vincennes, IN 47591. Goodwin-Sievers Funeral Home is privileged and honored to be entrusted with the care of George.