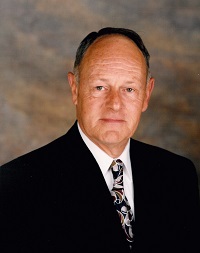 Born in: Vincennes, IN
Resided in: Terre Haute, IN

George Gardner, 90, formerly of Vincennes and longtime business owner passed away at 4:00 pm on September 27, 2022, at his residence in Terre Haute, IN. George was born on March 17, 1932, in Vincennes and is the son of Dexter Carl and Hellen (Tracey) Gardner. George married Virginia “Jenny” Johnson and she preceded him in death in March of 1989. He then married Linda Scott on June 11, 1990.

George was a member of First United Methodist Church in Vincennes and served his country in the United States Army during the Korean Conflict. George attended Culver Military Academy and was a proud graduate of the 1950 class at Vincennes Lincoln High School. He then attended the Indiana College of Mortuary Science and upon graduation in 1954 came back home to Vincennes to serve as a 6th generation funeral director where he owned and operated Gardner and Son Funeral Home for many years until his retirement. After his retirement he worked part time for DeBaun Funeral Home until October of 2021.

Some of George’s other civic memberships include the American Legion, Vincennes Chamber of Commerce, Vincennes Rotary Club, Elk’s Club, Vincennes #1 Masonic Lodge F&AM, Scottish Rite as a 32nd Degree member, Hadi Shrine, Royal Order of Jesters, Vincennes Harmony Society, Indiana Society of Chicago, and 40 et 8. George was also proud of the fact he was awarded the Sagamore of the Wabash and a Kentucky Colonel. Some of George’s hobbies included studying the stock market, working in the yard, and reading.

Survivors include his wife, Linda Gardner of Terre Haute, IN; his step-children, John Scott of Round Rock, TX,  Sheryl Scott of Decatur, IL, Joran Scott of Terre Haute, IN, grandchildren, Travis Satterfield and his wife Ashley, and Brayden Scott; sister, Edwina Carlton of Frankfort, IN; daughter-in-law, Pam Gardner of Vincennes; son-in-law, Ron Thomas of Vincennes; nieces, Karen Barr of Frankfort, IN, and Anne Belcher of St. Simon, GA. George is preceded in death by his parents, Dexter and Hellen Gardner, his first wife Jenny Gardner, daughter, Jan Thomas, and his son, David Gardner.

Friends may visit with George’s family from Noon until the hour of service time of 2:00 pm on Monday, October 3, 2022, at Goodwin-Sievers Funeral Home Gardner- Brockman Chapel, 505 Main St., Vincennes, IN with Pastor Matt Swisher officiating. George will be laid to rest in Fairview Cemetery. Online memories may be sent to George’s family and friends at www.goodwinsievers.com. Memorial contributions may be made Red Skelton Children’s Clothing Fund through the United Way. Goodwin-Sievers Funeral Home is honored and privileged to be entrusted with the care of George and his family.