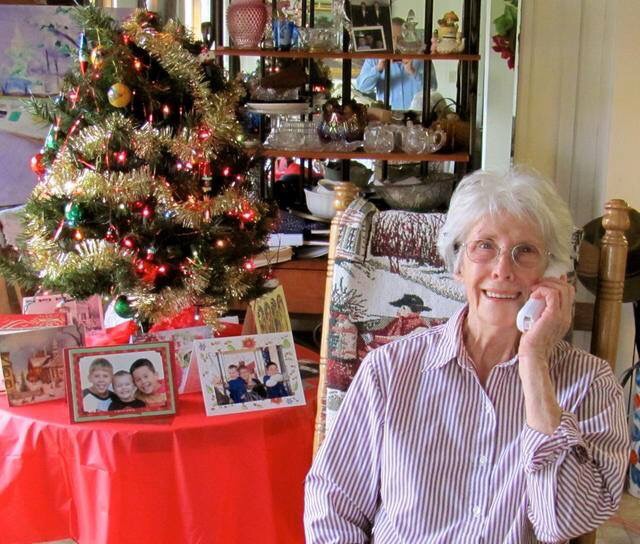 Geniece Leftwich Marcum passed away at TJ Samson Hospital just before noon on Tuesday, February 28, 2017. Her daughters were on either side of her hospital bed as she took her last breaths roughly 24 hours after having been struck by a massive brain hemorrhage.

Visitation will begin at 12 noonCT on Friday, March 3, 2017 at Butler funeral home, 201 East Street, Edmonton, KY. Her funeral service will begin at 3:30pmCT with burial to take place immediately following the service.

She will be laid to rest in the Edmonton Cemetery beside her husband Earl Reid Marcum who preceded her in death in 1986.

She was born on December 24, 1929, the ninth of nine children of Walter Scott and Addie Turner Leftwich of Edmonton. She was about six years old before some of the older ones left home and she had her own place at their big table. Singing Jimmy Rogers songs and yodeling gained her nickname Jimmy in the neighborhood around her beloved farm where she grew up, in the river bottom land behind what is now Bowling Park about two miles outside Edmonton. She walked to the Belview School for early grades and attended Edmonton High School.

She was preceded in death by her parents and by all eight brothers and sisters -- Daisy, Isabelle, Almedia, Eugenia, Russell, Ray, Robert and Rondyl. She missed them all fiercely.

Geniece's perfect day began with an exactly right sized cup of black-as-night coffee and a hot buttered biscuit, maybe two, depending on how the day was sizing up. She loved animals and demanded they all be treated gently and with respect. Her favorites were horses, especially Cherokee, and dogs, especially Poodelle. She loved life, family, friends, flowers, sparkly jewelry, fashion, reading, creative writing and taking pictures. Librarian Laska Martin once said of the young teen that she thought Geniece had read every book in the Edmonton Library.

She lived in Sulphur Well in the early years of her marriage and then back in Edmonton a block off the square. She also lived for brief times in Shelbyville, KY and Columbia, KY late in her life, but her heart never really left Edmonton. In her career, she worked as editor of the Celina, TN Clay Statesman, as assistant editor of the Edmonton Herald News, and for eleven years for the State of Kentucky as a toll taker on the Cumberland Parkway. In retirement she went back to her love of writing, starting Senior Quest Magazine. Her favorite stories are printed in the book The Best of Senior Quest.

She is survived by:

Donations to Alzheimer's Research may be made in her memory at the funeral home.