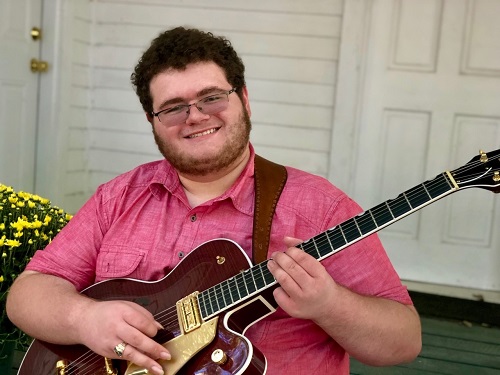 Evan James Twitty, of Vincennes, was born February 15, 2001 in Vincennes, the son of Rick and Jamie (Hess) Twitty.  He was a member of the Bunker Hill General Baptist Church, and was part of its praise team.  A 2019 graduate of South Knox High School, he served as class secretary. He was attending Vincennes University for audio recording, and was part of the blues ensemble. Evan loved music his entire life, and music played a huge part in his life. He started playing guitar when he was two years old, and played at the farmers market since he was six years old. He was a four-time gold medalist in state choir competition  in solo ensemble. Evan got to meet and play music with Vince Gill in Nashville, TN and with James Burton, who was Elvis Presley’s guitar player. When Evan was seven years old, he played with Leon Rhodes, who was Ernest Tubbs Guitar player in Nashville, Tennessee.  His accomplishments in music were plentiful, as were his memberships in music associations. Evan was a member of the Chet Atkins Appreciation Society, Country Gospel Music Association, International Home of the Legends, and the South-Central Indiana Blues. His awards included 2015 International Home of the Legends Thumbpicking Horizon Award, 2015 International Traditional Thumbpicking Champion, 2016 Country Gospel Music Association Instrumentalist of the Year, and the Teenage Performer of the Year. In 2017, he became an endorsed artist for Gretsch Guitars, and in 2018 was the Traditional Champion in Arkansas Thumbpicking guitar. In  2019, he was the Arkansas Contemporary Thumbpicking Champion and finished second in individual fingerstyle competition. He won the  2020 International Blues Competition Youth Show Case Award in Memphis, Tennessee. On Friday, February 7, 2020 at the age of 18, Evan passed away, the result of a car accident.Those surviving, who will cherish Evans’s memory, include his parents Rick and Jamie (Hess) Twitty of Vincennes and the love of his life, his high school girlfriend Jennie Davis. Evan was preceded in death by his grandparents, Junior and Rosie Twitty and James and Edna Hess.A Celebration of Evan’s Life will be held at 11:00 am Friday, February 14, 2020, in the South Knox High School gymnasium, with Pastor Jay Howder officiating.  Burial will follow in the St. Vincent Cemetery. Visitation will be from 4-8 pm Thursday in the South Knox High School auditorium. In lieu of flowers, memorial contributions may be directed to the Evan Twitty Scholarship Fund, Bunker Hill General Baptist Church, or the Vincennes Pet Port. Goodwin-Sievers Funeral Home is honored to serve the family of Evan Twitty.