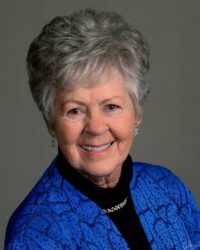 Born in: Knox County, IN
Resided in: Monroe City, IN

Ann was a 1951 graduate of Monroe City High School and went on to pursue a degree in nursing in 1955 from the Good Samaritan School of Nursing. Ann served in various capacities as a registered nurse starting with Good Samaritan Hospital on the Obstetrics unit and then with the Vincennes Orthopedic Clinic. In 1968 she became school nurse at South Knox High School and held this position until 1976. Ann was a member of the Indiana Presbyterian Church and played the piano there from the age of 14. She was a wonderful Grammy and enjoyed baking, and mushroom hunting. Ann was a great farm wife who was willing to help out any way she could and especially liked feeding everyone on the farm.

Friends may visit with Ann’s family from 4-8 pm on Sunday, September 26, 2021 at Goodwin-Sievers Funeral Home, 524 Broadway, Vincennes. Ann’s funeral service will be held at 11:00 am on Monday, September 27, 2021 at Indiana Presbyterian Church with Pastor Frank Harmon officiating. On line memories may be shared with Ann’s family at www.goodwinsievers.com. Goodwin-Sievers Funeral Home is honored to be entrusted with the care of Ann. In lieu of flowers contributions may be made to Indiana Presbyterian Church.