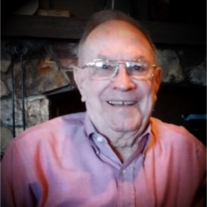 Douglas Paul Harkins, 92, of Owensboro, and formerly of Hartford, Kentucky passed away early Tuesday morning, January 28, 2020 under the care of Hospice of Western Kentucky. He was born on May 28, 1927 in Providence, Kentucky to the late Paul and Pearl Pounds Harkins. Doug was a veteran of the U.S. Army having served in WWII. He went on to work and retire from Tichenor Chevy, Olds, and Buick after 32 years. He was a former member of Hartford First Baptist Church, was a member of Apollo Heights Baptist Church, and was a member of The Gideons International. Doug was devoted to his church and his faith. Aside from his parents, Doug is preceded in passing by his wife of 64 and a half years Naomi Sansom Harkins; and an infant daughter, Debora Kay Harkins. Doug is survived by his children, Dr. Gay (David) Baughman of Louisville, Kentucky, and Keith Harkins of White Lake, Michigan; and his grandson, Joshua David Baughman of Washington D.C. Services will be held 11:00am Saturday, February 1st at Miller-Schapmire Funeral Home with Bro. Ed Mitchell and Bro. Jerry Carter officiating. Burial will follow at Oakwood Cemetery in Hartford, KY. The Ohio County Honor Guard will be conducting Military Honors. Visitation will be Friday, from 4:00pm until 8:00pm, and again, Saturday from 10:00am until the time of service at the funeral home. Miller-Schapmire Funeral Home is both honored and privileged to be entrusted with the care of Mr. Harkins. Share your messages of condolence with the family of Douglas Paul Harkins at www.millerschapmire.com