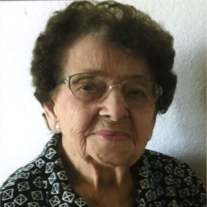 Dorothy “Dot” Waller 97 of Bowling Green and a former Barren County resident, died Wednesday February 22, 2017 at Magnolia Village in Bowling Green. She was the daughter of Harlan Yancey Landrum and Jewell Bishop Landrum. Ms. Waller was a seamstress and a former employee of Snyder’s, Hess’s, Golden-Farley and Kentucky Pants Co. She was a member of Old Zion Methodist Church and attended Pleasant Grove Baptist Church where she was the pianist. She is survived by 4 daughters, Lavenia Waller of Bowling Green, Kaye (Jerry) Shelton of Bowling Green, Gayle (Norman) Parker of Caneyville and Connie (Tony) Adkisson of Kingsport, TN; grandchildren, Kim (Tony) Gentry, Stephanie (Daryl) Hitch, Tim (Johnna) Shelton, Kristie Shelton, Sherry (Travis) Brown, Danielle (Phillip) Cunningham, Derek (Ivy) Adkisson and David (Sarah) Adkisson; 14 great grandchildren, 1 great-great grandchild; a sister Waldean Settle of Glasgow and a sister-in-law Mary Landrum of Glasgow and several nieces and nephews. She was preceded in death by an infant daughter Phyllis Arlene Waller, a brother Leroy Landrum and a grandson Ricky Wingfield. Funeral services will be 2pm Sunday at A. F. Crow & Son Funeral Home with burial in the Old Zion Cemetery. Visitation will be on Saturday from 5pm until 8pm and Sunday until time for the service. The family would like to thank the staff at Magnolia Village for the care and compassion given Mrs. Waller. Alternate expressions of sympathy may be made to the Alzheimer’s Assn.