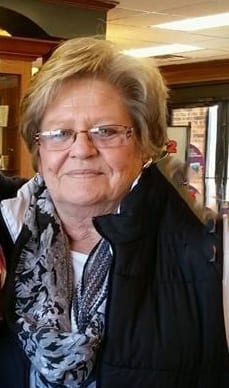 Doris L. “Dodie” Partridge, 65, passed away on October 23, 2020 at Deaconess Gateway Hospital in Newburgh, IN surrounded by her family and close friends. Dodie was born on May 31, 1955 in Vincennes the daughter of Lester and Olive (Alderson) Bond.Dodie worked at Boonville McDonalds from 1991 until she retired in 2015 as store manager. She was a member of the American Legion Auxiliary, Moose Lodge of Vincennes and the Eagles Lodge #384 of Vincennes. Dodie enjoyed camping in Montgomery, IN with her mother, sister, grandchildren and all of her family. She loved cleaning, gardening, music, her swimming pool, and being with her family and friends. Her two greatest joys were her sons and her grandchildren.Survivors include her sons, Fredrick Warren  Qualkenbush III of Elberfeld, IN, Brian Joseph Qualkenbush of Newburgh, IN; grandchildren, Brook Alexandra Qualkenbush of Virginia, Braiden Joseph Burton of Boonville, IN and Kaley Storm  Qualkenbush of Boonville, IN; brothers, James Bond and his wife Lorna of Vincennes, Ronald Bond and his wife Cindy of Vincennes, Bill VanLue of Missouri, Bruce VanLue and his wife Innie of Vincennes; sister, Pamela Goldman and her husband Dale of Vincennes, her brother-in-law Joe Carie of Vincennes, as well as many brother and sister-in-law's, nieces and nephews and close friends who loved her so much. Dodie was preceded in death by her father, Lester Bond, brother, Kenneth Bond, mother, Olive VanLue, step-father, Bruce VanLue, sister, Eva Carie, and brother Danny Bond.Friends may visit with Dodie’s family from 5-8 pm est on Wednesday, October 28, 2020 at Goodwin-Sievers Funeral Home, 524 Broadway, Vincennes, IN. Graveside services will be held at 11:00 am est on Thursday, October 29, 2020 at Memorial Park Cemetery.  Goodwin-Sievers is honored to assist Dodie’s family with arrangements.