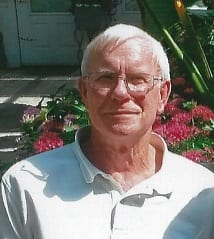 Danny Burch, 77, of Washington, IN, passed away November 7, 2020, at IU Health in Indianapolis, IN.Danny had worked at Crane NWSC from 1966-2006, and as a contractor at SAIC from 2006 – 2016. He graduated from Indiana University in 1966, with a BS Degree in chemistry, and was a 1961 graduate of Bloomfield High School.He was a member of Christ United Methodist Church, in which he had held several offices. He also participated in many Walks to Emmaus and had a strong reunion group. Along with traveling to all 50 states and several other countries, Danny also enjoyed gardening and lawn work, reading, and mushroom hunting. If he wasn’t watching his grandkids play sports, he was watching IU sports or the Colts.Survivors include, his wife of 51 years, Phyllis (Allison) Burch, whom he met at Crane; his daughters, Kristen Kelley and her husband, Bruce, of Zionsville, IN, Tracy Burch of Indianapolis, IN, and Alyson Reuter of Noblesville, IN; his twin brother, Sam Burch and his wife, Judy, of Carl Junction, MO; and five grandchildren, Anna Kelley, Cannon Kelley, Will Kelley, Addy Reuter, and Max Reuter.Born August 1, 1943, in Bloomfield, IN, he was the son of Weir and Leona (Anderson) Burch. His parents; and his siblings, Martha Sue Hendricks and her husband, Rex, Don Burch and his wife, Lou Anna, and Cherry Myers preceded him in death.Friends may visit with Danny’s family from 4:00 – 8:00 on Thursday evening or 9:00 on Friday morning before the service, at the Christ United Methodist Church, 104 N. Meridian Street, Washington, IN. The funeral will be conducted Friday, at 10:00 at the church. Burial will follow in Sugarland Cemetery. Goodwin-Sievers Funeral Home is assisting with the arrangements. The service will also be shown via Facebook Live through the Goodwin Sievers Funeral Home Facebook Page.In lieu of flowers, the family has asked that contributions be made to the American Cancer Society or Christ United Methodist Church in his name. Online condolences may be sent to the family through goodwinsieversfh.com.