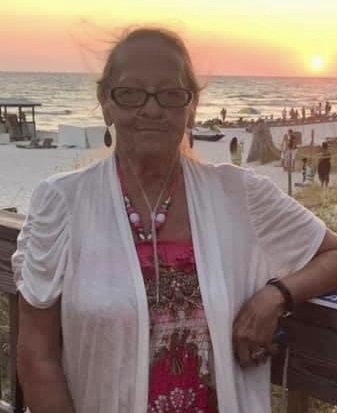 Connie Louise Coffey, 67 of Edmonton passed away Friday, July 22, 2022 at T.J. Samson Community Hospital in Glasgow. Connie was born June 14, 1955 in Anderson, Indiana to the late Earl and Clyonie Williams Phelps. Besides her parents she was preceded in death by her husband James Elmer Coffey, son, James Earl “Jamie” Coffey, stepson, Jimmy Coffey, grandson JR Gibson and brother Jerry Phelps. Paternal grandparents Dudley and Susie Phelps. Maternal grandparents Joseph and Emma Williams.
Connie loved to travel. One of her favorite trips was one she took to Japan when she worked at SEWS. It was her first time on a plane and the only time she was out of the country. There she met new friends and experienced life outside of Metcalfe County. She loved the outdoors and had an unbelievable green thumb. She could grow anything, and it showed by the number of flowers and flower beds in her yard. As she aged and became unwell, she certainly had no trouble bossing her kids and grandkids into taking care of her precious flower gardens. Those who knew Connie knew how important her family and friends were to here. She was an extraordinary woman who was full of warmth, love and light. She will be missed so very much.
Connie was the matriarch of her large family. She is survived by her companion of several years, Ron White. Three daughters. Tracy (Traci) Robertson, Jeannie (Larry) Wheeler and Tina Coffey. Son in law David Robertson and stepson Joe Coffey. Two brothers. Gene (Becky) Phelps of Hiseville. William (Debbie) Phelps of Glasgow. Four sisters. Patricia Phelps of Tompkinsville, Barbara Britt of Bowling Green, Leona (Ronnie) Wilson of Sulphur Well and Tammy (Terry) Gilbert. Six grandchildren. Hunter and Haylee Robertson, Morgan and Hannah Wheeler, James Allen Coffey and Faith Parker. Two great grandchildren. Braxton and Bentley. Another great grandchild is on the way. She also survived by a host of nieces, nephews and several very special people whom she spent a lot of time with.
Funeral services for Connie will be held 4:00 PM, Sunday at Butler Funeral Home in Edmonton with burial in the Thompson Cemetery in Green County. Visitation will be after 10:00 AM Sunday at the funeral home.
Butler Funeral Home is both honored and privileged to be entrusted to the care of Mrs. Coffey. Please share your messages of condolence with the family at www.butlermemorials.com.