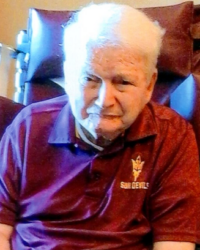 Clifford C. (Cliff) Williamson was born June 3, 1924, in Washington D.C. He moved as a child to Kimbolton, OH. Cliff graduated from Cambridge High School and then enlisted in the Army Air Force and trained as a Flight Officer. After
honorable discharge Cliff attended and graduated from Ohio State University with
a degree in Agronomy. He passed away on October 30, 2021.

Cliff worked for the Reynolds Metal Co. based in Louisville, KY traveling with a
display bus. Later worked for Odin Matteson that led to an offer to buy Daviess
Co. Nitrogen in Washington, IN which he owned for several years. After
closing the business, he worked for Essex Fertilizer.

He was a member of First Christian Church where he had taught Sunday School and served as a deacon. He was also a member of the Mason, Scottish Rite, and
American Legion. Cliff loved to play games, cards, and tennis.

He is proceeded in death by his mother Ruby Williamson, a sister Mary Curcio and nephew Greg Curcio.

Visitation for Clifford will be held on Wednesday, November 3rd, 2021, from 11:00 – 12:00 at Goodwin Sievers Funeral Home 2020 State St. Washington, IN 47501. A Masonic Service will follow at 12:00 pm. A memorial service will then be conducted with Pastor Phil Kessen officiating. Burial will follow at Sugarland Memory Gardens with military rites. The family asks the in lieu of flowers memorial contributions be made to Heart to Heart Hospice.

Online condolences may be made at goodwinsievers.com. Goodwin Sievers Funeral Home is honored to be entrusted with the care of Clifford Williamson.

The family greatly appreciates donations made to these charities in Clifford C. "Cliff" Williamson 's name.