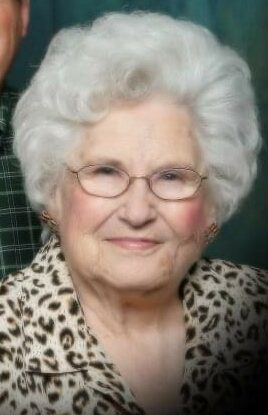 Christine S. Boone, age 95 of Caneyville, passed away Saturday, January 8th 2022 at the Grayson Manor Nursing & Rehabilitation Facility in Leitchfield. She was born February 12th 1926 in Caneyville, KY, the daughter of Charles & Leland Strasburger. Christine was a caring person who loved her family and Bunko friends, she enjoyed needlework and quilting, making numerous quilts for babies who were comforted by the warmth she provided them. Christine enjoyed cooking and was said to have probably fed everyone in Grayson County at least once. She was a member of the New Harvest Baptist Church and the Order of the Eastern Star Short Creek Chapter 27 for over 50 years.

Other than her parents, she was preceded in death by her husband, Ralph Roger Boone, Sr.; one son, Roy Daniel Boone; one brother, Jacob Strasburger; and one sister, Lucy Lapham.

All friends and family who wish to attend the visitation or funeral service are asked by the family to wear face coverings while at the funeral home.

In lieu of flowers, expressions of sympathy can be made in the form of donations to the McCanless Cemetery Fund c/o Jim Purcell 1134 Sinks Rd. Caneyville, KY 42721.

Caneyville Memorial Chapel is both honored and privileged to be entrusted with the care of Mrs. Boone. Share your messages of condolence with the family of Christine Boone and sign her virtual guestbook below.