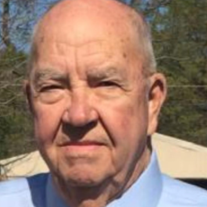 Charles Mitchell “Mitch” Ellis, 89, passed away on February 20, 2020 at Hospice Care in Louisville. He was surrounded by his loving family. Born June 16, 1930 in Glasgow, KY, to the late Elbert & Ermin Powell Ellis. After growing up on a farm, he joined the United States Airforce and served in Europe during the Korean Conflict. Returning home, he pursued a career with General Electric in Louisville, where he would retire after 35 years. After his retirement, he would later work for the Barren County Sheriff department, until he moved back to Louisville in 2015. His love for his family, cars, sports, racing, church and service, gave him a rich and full life. Mitch’s sense of humor was loved by all. He is survived by his wife of 64 years, Betty Glover Ellis; two sons, Charles “Tony” Ellis (Angie Fender Ellis) and Steven Ellis (Dan Brake); two grandchildren Chris Ellis (Kellie Little Ellis) and Jessica Stevens (Matthew); great grandchildren, Leah Madison Fultiner, Riley Jo Stevens, Kinsley River Stevens, Nolan Cole Ellis and Palmer Rose Ellis; 3 sisters, Linda Steenbergen, Dorothy Elliott and Wilma Boles; one brother, Rondal Ellis. In addition to his parents, he was preceded in death by two brothers, Richard and William Emberton. Funeral services will be 1:00pm Monday, February 24, 2020 at the A.F. Crow & Son Funeral Home with burial in the Glasgow Municipal Cemetery. DAV Chapter #20 will provide military honors. Visitation will be on Sunday from 12:00pm until 8:00pm and on Monday until time for service at the funeral home. In lieu of flowers, a memorial contribution may be made to the Hosparus Care Center, Norton Healthcare Pavilion 315 East Broadway, 6th fl. Louisville, KY 40202 A.F. Crow & Son is both honored and privileged to be entrusted with the care of Mr. Ellis. Please share your condolence with the family at www.crowfuneralhome.com