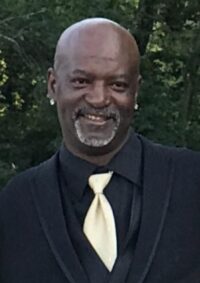 Born in: Birmingham, AL
Resided in: Vincennes, IN

Cedric De’Andrial Voltz was born October 17, 1967 in Birmingham, AL to Philip and Odessa (Cabil) Voltz. He married Michelle Updike on January 18, 1991 and they were married seventeen years and had three children together and moved to Indiana in January of 1992.

Cedric had worked for Henderson Transfer and most recently Schott Gemtron. He was an avid sports fan but mainly loved his Alabama Crimson Tide and Dallas Cowboys and was known for constantly joking around and giving people a hard time.

Cedric is survived by his children, Son Jordyn Voltz and his wife Amanda, daughters, Rheagan Voltz, Andria Quivac and her husband Peter, Mackynzee Hicks and her husband Garrett; ten grandchildren, sisters, Melisa Stewart and Angel Voltz; and brothers, Roderick Cabil and Philip Voltz III and a host of nieces and nephews. Cedric was preceded in death by his parents, Philip Voltz, Jr. and Odessa Cabil Voltz, and his sister, Pearlie Cabil.

There will be a visitation on Thursday, October 21, 2021 from 3-6 pm at Goodwin-Sievers Funeral Home, 524 Broadway, Vincennes, IN. The family asks that you wear a Alabama or Dallas Cowboys shirt or football jersey of your choice. There will be no graveside service as Cedric’s wishes were to be cremated and taken back home to be buried by his parents. On line memories may be shared with Cedric’s family and friends at www.goodwinsieversfh.com. In lieu of flowers, the family asks that you make a donation to any AA or NA or recovery program of your choice in Cedric’s name. If you or anyone you know is suffering from alcoholism or drug addiction, there is help available. Goodwin-Sievers Funeral Home is honored to be entrusted with the care of Cedric.