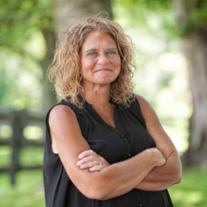 Brenda West Komar, age 54, of Glasgow, passed away, Wednesday, January 22, 2020 at Jewish Hospital in Louisville following a short illness. Brenda was born October 12, 1965 in Ligonier, Pennsylvania to the late Daniel West and Dorothy West who still survives. In addition to her father, she is preceded in death by her brother, David Ankney. She is survived by her loving husband of 33 years, Billy Komar; one son, Josh Komar(Megan); one daughter, Nikki Jones. Brenda leaves behind four grandchildren who were her pride and joy, Jackson and Hesston Jones and Bailey and Tate Komar. Brenda grew up in Ligonier, Pennsylvania where she met her husband. Together they relocated and made their home in North East Ohio where her love and passion for dairy farming was ignited. Their family grew with the birth of their children. Brenda and Billy moved their family to Kentucky in 2003, where she made her final home and her family continued to grow. Her grandchildren were her pride and joy. She enjoyed spending time with her family and friends on the lake and anywhere tropical. She lived her life to the fullest and always did what she wanted to do. Brenda was a hard worker and took great pride in managing and then owning Coral Hill Dairy. Brenda was a friend to all who knew and loved her. Funeral services will be 3:00 PM, Sunday, January 26 at A.F. & Son Funeral Home with cremation to follow. Family and friends will be received Saturday, January 25 from 2:00 PM until 8:00 pm and Sunday morning until time for services at the funeral home. In lieu of flowers, memorial contributions may be made to St. Jude Children’s Research hospital. A.F. Crow & Son is both honored and privileged to be entrusted with the care of Mrs. Komar Share your message of condolence with the family of Brenda Komar at www.crowfuneralhome.com