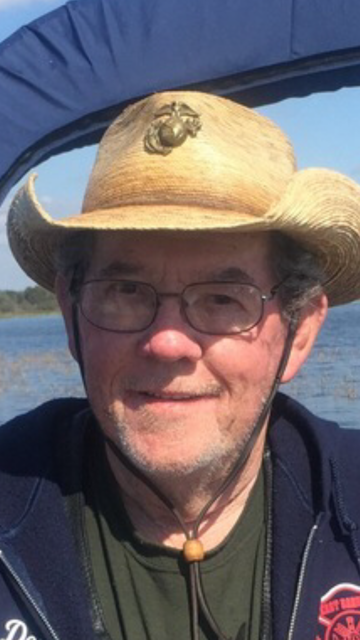 Billy Wayne Davis Sr, age 79, died on July 26, 2021 at NHC in Glasgow. He was born on October 3, 1941 in Pulaski, Virginia to Dennis and Lou Davis.
Billy proudly served his country in the United States Marine Corp from July 10, 1961 until July 9, 1965. He was a Radio Relay Operator, serving off the coast of Cuba during the Cuban Missile Crisis. He received a good conduct medal and was a lifetime member of the VFW.
Billy was a carpenter and retired from the Corvette Plant in Bowling Green. Billy loved hunting, fishing, riding horses and wood working. He enjoyed being an “extra” in plays at the Barn Lot Theater. One of his favorite things was making homemade ice-cream at family gatherings. He was a member of the Refuge Church of Christ where he and Charlotte were active taking the senior members on many trips to various places. He spent several summers at Taylor Christian Camp with his church family. Billy was always up to something and liked to joke with everyone he was around. The short time he was a resident at NHC he made numerous friends with the staff as well as residents. His favorite person there was his roommate, Johnnie.
Preceded in death by his parents, he is survived by his brother, Mikell Davis, his loving wife of 58 years, Charlotte Dunnam Davis, his older son, Billy Wayne Davis, Jr., younger son, Boyd Heath Davis (Sandy), and his daughter, Heather Davis Clements (Larry). He is also survived by several grandchildren, Billy Davis,III., (Misty), Mason Colt Davis, Daniel Mooney (Amelia), Mackenzie Clements Ramsey (Deven), Madison Clements, and Chandler Clements. In addition, he has remaining great-grandchildren Gavin Davis (Riley), Travis Wilson Davis, Colton Davis, Madelyn Davis, Quinn Mooney, Heath Mooney, Darci Ramsey, and Daxen Ramsey, along with great-great-grandchildren, Sterling and Stella Davis.
In lieu of flowers the family requests donations be made to the Parkinson’s Foundation at 135 Parkinson Avenue, Staten Island, New York in memory of Billy Davis.
Visitation will be Saturday, July 31, 2021 from 10 am until time of the funeral service at 2 pm at Butler Funeral Home in Edmonton. A private burial will follow.
Butler Funeral Home is both honored and privileged to be entrusted to the care of Mr. Davis. Please share your messages of condolence with the family at www.butler-funeralhome.com.