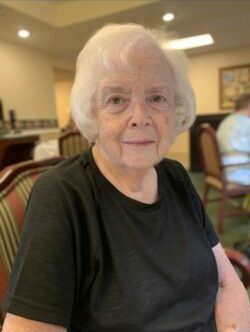 Beverly Anne (Ruston) Lottes, 79, of Washington, Indiana, went to her Heavenly home on Saturday, September 17, 2022 at her residence.

She was born on June 19, 1943, in Camden, Tennessee to the late Albert Ruston and Iona Beryl Jones Ruston.

On September 8, 1962, Beverly married the love of her life, Alan Lottes, and they spent over sixty years together happily married. Together they had two children: the late Todd Alan Lottes, and Jacki Lottes Webber.

Anne was a legal secretary for her whole career, and worked for various offices before retirement. She was a member of the Christ United Methodist Church in Washington, Indiana. She was involved in the “Friends of the Library”, a member of the Legal Secretaries Association, and a member of the Beta Sigma Pi. She enjoyed spending time with her family, especially her grandchildren.

She was preceded in death by her parents, Albert and Iona, and her son, Todd Alan Lottes, and her sisters, Glinda Sue “Ruston” Schmitt, and Mary Margaret “Corn” Schauberger.

Visitation for Anne will be held on Thursday, September 22, 2022, from 11:00 – 1:00pm at Goodwin Sievers Funeral Home, 2020 State St., Washington, Indiana 47501. A funeral service will follow immediately at 1:00pm with Pastor Terry Fletcher officiating. In lieu of flowers, the family requests memorial contributions to be made to: Helping Hearts Hospice, 1314 E Walnut St., Washington, Indiana 47501. Interment will follow at Sugarland Memory Gardens.

Online memories may be shared with the family at goodwinsievers.com. Goodwin Sievers Funeral Home is honored and privileged to be entrusted with the care of Anne and her family.

The family greatly appreciates donations made to these charities in Beverly Anne Lottes 's name.