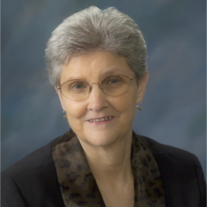 Betty Jane Brasher Thompson, 82, of Owensboro, KY, died at home on January 19, 2020. Born May 27, 1937, in Bon Harbor, Daviess County, she is predeceased by her parents, Herschel and Rita (Sapp) Brasher of Knottsville, KY, her husband of 48 years, Everett Eugene Thompson of Owensboro, her son James William Thompson of West Louisville, her sister Lois Johnson of Knottsville, her brother Stephen Brasher of Cantonment, FL, and her sister Anna Christine (Tina) Payne of Owensboro. Jane worked at General Electric until 1960, and worked at and retired from the U.S. Department of Agriculture Farm Service Agency office from 1977 to 1999. She loved family visits, reading, antiques, looking at houses, and being in the sun. She often traveled to Florida with friends until recent times. She is survived by five of her children: Michael (Lillie) Thompson of Garden City, KS, Lynette (Tim) Bender of Louisville, KY, Patrick (Joan) Thompson of Old Hickory, TN, Gene (Judy) Thompson of Maceo, KY, Elizabeth (Jim) Byers of Louisville, KY, grandson Taylor Bender of New Albany, IN, grandson Matthew (Martha) Thompson of Old Hickory, TN, granddaughter Katherine (Chuck) Wethington of Bowling Green, KY, grandson Jared (Tara) Thompson of Old Hickory, TN, granddaughter Laura (Chad) Thomas of Owensboro, KY, grandson Ross Bender of Louisville, KY, grandson Jacob Thompson of Indianapolis, IN, grandsons Owen and Jude Byers of Louisville, KY, and twelve great-grandchildren. She is also survived by her siblings, David Brasher of Owensboro, KY, Leon Brasher of Bowling Green, KY, Sharon Payne of Brownsburg, IN, Danny Brasher of Utica, KY, Darrell Brasher of Whitesville, KY, Richard Brasher of Lizton, IN, and Martin Brasher of Petersburg, IN. Services will be 6:30 pm Wednesday, January 22, 2020 at Haley McGinnis Funeral Home in Owensboro, KY, with Pastor Scott Kenworthy officiating. Visitation will be from 12:00 pm until time of service Wednesday. Inurnment to follow 10:00 am Friday at St. Anthony Cemetery. The family wishes to extend to everyone who cared for and extended emotional support to Jane and her family during her final days their warmest gratitude. As an expression of sympathy, donations may be made to Hospice of Western Kentucky in Owensboro. Haley McGinnis Funeral Home & Crematory is both honored and privileged to be entrusted with the care of Mrs. Thompson. Share your messages of condolence with the family of Jane Thompson at www.haleymcginnis.com