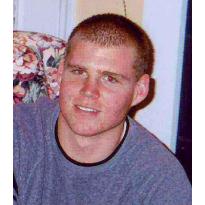 Austin C. Millay, 2l of 5282 Hwy.60 West of Owensboro, died on Sunday October 10, 2004 at Owensboro Medical Health Systems of injuries from a motorcycle accident. He was born May 31, 1983 in Daviess County, was employed at Texas Roadhouse and was full time student at Kentucky Wesleyan College and a member of the football team. He was a 2002 graduate of Owensboro Catholic High School where he played football adn lettered all four years. He was a member of Precious Blood Catholic Church. Austin loved playing football, riding his motorcycle and wake boarding. He was deeply loved by his family and friends. Austin was preceded in death by his grandfathers, Robert A. Millay and Harold R. Bullock. He is survived by his parents, Gary and Stephanie Bullock Millay, a son Alex, his three brothers, Nathan of Nashville, Jonathan of Lexington, and a twin brother Adam of Owensboro. His loving and best friend Kim Fitzgerald of Owensboro, Ky., grandmothers, Margaret Millay and Mary Bullock and niece, Caleigh Millay. He is also survived by several aunts and uncles and cousins. Services are to be at Noon Wednesday, October 13, 2004 at Blessed Mother Catholic Church, Visitation from 3:00 to 8:00pm. Tuesday and 9:00 to 11:30am. Wednesday, prayers will be said at 6:30pm. Tuesday. Burial will be in Resurrection Cemetery. Reverend Brad Whistle and Reverend Freddie Byrd will be officiating. The family wish that expressins of sympathy take the form of donations to: Precious Blood Building Fund in Memory of Austin C. Millay, 3306 Fenmore Street, Owensboro, Kentucky 42301.