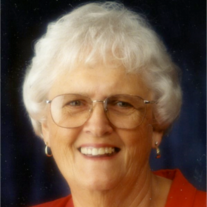 Audrey Kline Cox, 85 of Glasgow, died Wednesday December 16, 2015 at her residence. She was born in Frederick, MD the daughter of the late Wilfred Kline and Mamie Irene Redmond Kline, and was married to the late Arnold Bedford Cox. She worked as a Quality Inspector at Sorenson in Glasgow for many years, and later worked at Vangard Labs in Glasgow. Audrey enjoyed traveling and sewing quilts; she also loved playing cards with her family and especially playing bridge. She was a member of the First United Methodist Church in Glasgow.

Funeral services will be 2:00pm Sunday December 20, 2015 at the A.F. Crow & Son Funeral Home with burial in the Happy Valley Memorial Gardens. Visitation will be after 4:00pm Saturday December 19, 2015 at the funeral home.